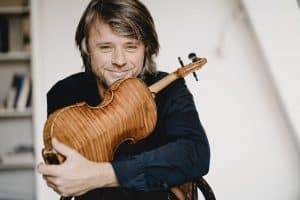 This March the ESO return to St Peter’s Church Hereford and the Great Malvern Priory for two special performances featuring Maja Bogdanovic (*4th March only) and Daniel Rowland. The first concert sees Bogdanovic and Rowland join forces to perform Sawyers’ Double Concerto for violin and cello, written for them by the composer, and for the second concert on 5th March Rowland puts his violin away and performs Sawyers’ virtuosic Viola Concerto.

Composed on his first trip to London, Haydn’s Symphony No.96 is an accomplished and uplifting work and became part of a collection of works known as his ‘London’ symphonies. It was also given the nickname ‘The Miracle’ based upon an account of a chandelier falling during a performance and nearly missing the audience… This actually happened at a performance of a different Haydn symphony but the name stuck.

As with so many musical nicknames, the title ‘Jupiter’ for Mozart’s Symphony No.41 did not originate from the composer, it is believed that the German violinist Johann Peter Salomon (the same man who championed Haydn’s career in London in the 1790s) devised the name to capture the essence of a symphony of such epic proportions. As a contemporary of Haydn, Mozart was in awe of Haydn and often invited him to his concerts and the reciprocity of admiration was felt both ways. In fact, Mozart’s Requiem was even performed at Haydn’s funeral.

Sawyers was commissioned in 2009 to write a cello concerto for rising star, Maja Bogdanovic and since then her musical and personal connection with the virtuosic violinist Daniel Rowland inspired Sawyers to compose a double concerto for them both. Overshadowed by the famous Brahms double, this was a somewhat daunting task. The resulting work, written in 2020, is in three movements and is a piece which reflects ideas of journeys and develops as the music unfolds.

Following on from the success of Poulenc’s full-length ballet score, Les biches, commissioned by the legendary Sergei Diaghilev in 1923, the composer was fortunate to enjoy many well-paying commissions and fame as a result and one such opportunity was presented by the BBC in 1947 which went on to become his Sinfonietta. Although many musicologists have alluded to some ‘structural weaknesses’ within the work due to such contrasting styles, Poulenc’s complex emotional character is what gives this piece its dynamism and to quote the composer “don’t analyse my music – love it!”.

The story of Mozart’s final three symphonies is a remarkable one. He wrote all three pieces within the space of about nine weeks in 1788, as well as writing other works and simultaneously dealing with immense personal struggles. However, his Symphony No.40 is an iconic and instantly recognisable work that has been widely used in TV and film and possibly most frustratingly for classical music lovers, a catchy ringtone in the 1990s, and yet it’s power to draw the listener in is still as strong today as it was over 230 years ago.

Sawyers’ Viola Concerto was written in 2020. The work was inspired by attending a recording session by fellow composer and friend David Matthews. The lovely playing of the viola part by Sarah-Jane Bradley set off some ideas for a viola concerto of his own and tonight this piece is brought to life by Daniel Rowland.