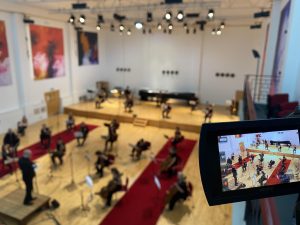 Just in case you missed it… The English Symphony Orchestra launched its 2022 season in early February and will be performing live concerts in Worcester, Hereford, Gloucester, Cheltenham and beyond throughout the season. Read more here: https://eso.co.uk/english-symphony-orchestra-2022-season-launch/

Also coming up this season is a series of virtual concerts to be broadcast via the ESO’s online streaming service, ESO Digital, so even those further afield can enjoy the music of the ESO from the comfort of their home. Here’s a sneak peek at what’s coming up on the ESO Digital platform this February and March.

Friday 18th February at 7.30pm
The Music of Saxton & Sawyers

Philip Sawyers, the ESO’s Composer Laureate, was the first composer to feature in the orchestra’s acclaimed 21st Century Symphony Project. Written in 2020, Remembrance for Strings is a touching meditation on loss, based on themes from Sawyers’ tone poem based on the paintings of Samuel Palmer, The Valley of Vision.

The Octet was written for the young chamber ensemble Liquid Architecture, who gave the first performance in September 2007. The work marked an important evolutionary step in Sawyers move towards a more densely contrapuntal approach to composition, something that would have a pivotal influence on Sawyers’ Second Symphony and the works which followed.

Robert Saxton’s powerful tone poem for strings, The Resurrection of the Soldiers, was inspired by the visionary series of paintings by Stanley Spencer in Sandham Memorial Chapel. Informed by his own harrowing experiences as a soldier in the British Army in WWI, Spencer’s extraordinary images depict soldiers rising from their graves on the last day. Saxton says of the piece that “it progresses towards a sense of hope.

Adrian Williams is the ESO’s current John McCabe Composer-in-Association and his First Symphony was a lifetime in the making. Recorded back in December 2021, at Wyastone Recording Studio, the ESO were honoured to perform the world premiere of this work and to include it in their acclaimed 21st Century Symphony project.

Adrian Williams on Symphony No 1: “It’s been more than half a century since my first juvenile attempt at a symphony. In 2018 Kenneth Woods gave me the chance to begin writing symphonies through an invitation to compose a work for his 21st Century Symphony series. Much of this substantial work was conceived on long walks on Hergest Ridge and elsewhere in the Welsh borders. The slow movement owes much to the distressing media coverage of the forest fires in Australia. Much of the four-movement work is anguished and intense but its final affirmatory bars leave any anguish far behind.”