On Stage in Elgar Country- English Symphony Orchestra Celebrate Young People in the Performing Arts, 4-6 May 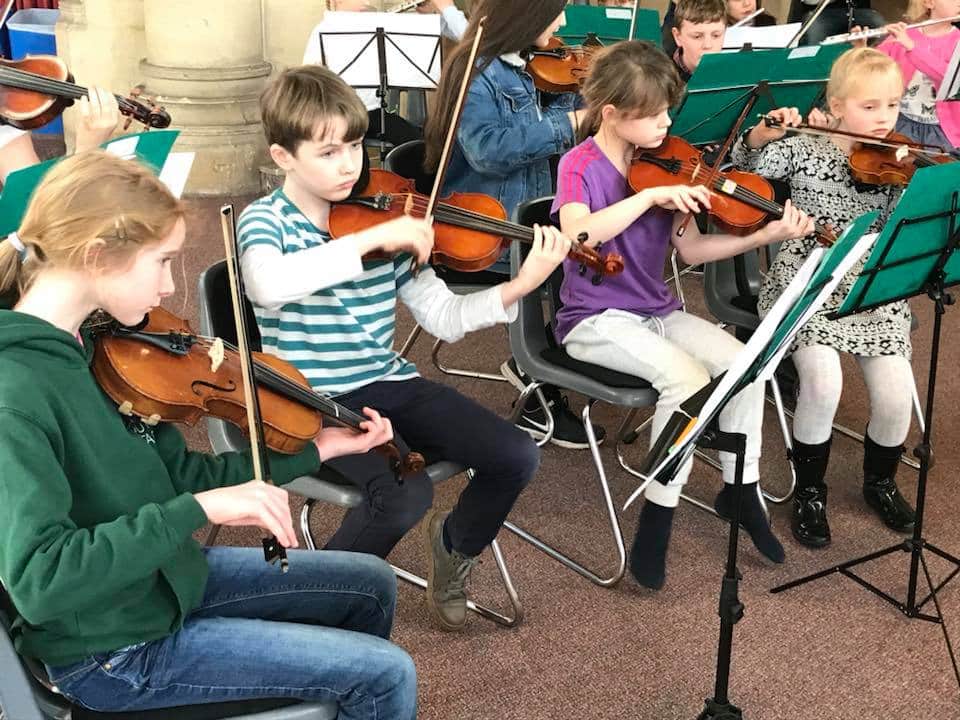 The English Symphony Orchestra are welcoming the renewing force of spring on the first weekend of May, with a celebration of young people in the performing arts across the region, “On Stage in Elgar Country.” In the course of these festive few days, the region’s leading professional orchestra is joined in performances by young dancers, singers, actors and instrumentalists for performances of music ranging from Copland and Stravinsky to Beethoven and Weber.

4th May at 7:30- Theatre and Dance at the Swan Theatre, Worcester

On Friday, 4th May the ESO continue their work as Orchestra-in-Residence at Worcester Live at the Swan Theatre. The programme includes Stravinsky’s hugely popular work of musical theatre, The Soldier’s Tale, narrated by leading actor and director Ben Humphrey, including appearances of actors from the Worcester Young Rep company. The programme continues with a performance of one of the most beloved works of 20th C. music, Aaron Copland’s Appalachian Spring, presented here, as originally conceived, as a fully staged ballet featuring the young dancers of Academy Theatre Arts, under the direction of Helen Leek. “Even at the most elite levels of the dance world, it is a special occasion when we get to dance a live orchestra,” says Leek. “For our dancers to perform such a seminal work sharing the stage with one of the country’s leading orchestras is really an incredibly exciting prospect.” Kenneth Woods, whose teacher was Copland’s friend and assistant in the 1950’s, conducts the programme and leading violinist Thomas Gould appears as guest leader and soloist in the virtuosic solo part in Stravinksy’s Soldier’s Tale.

Igor Stravinsky’s L’Histoire du Soldat (“The Soldier’s Tale”) is a ground-breaking work for actors, dancers and musicians composed 1918. It tells a humorous version of the Faust myth, in which a young soldier returning from the war is persuaded to sell his beloved fiddle to the devil in exchange for love and wealth. “Goethe’s telling of the Faust story was so influential,” says ESO Artistic Director Kenneth Woods, “that for most of the 19th Century from Schumann to Mahler, composers looked to this story as a vehicle for examining the most profound possible philosophical themes of love, redemption, endless striving and fate. Stravinsky, on the other hand, mostly plays it for laughs.”

Laughs in this production will be largely provided by narrator Ben Humphrey, Associate Director of Worcester Repertory Company, whose acting credits range from Shakespeare to yearly appearances as Dame Ginny of the Worcester Rep annual pantomime, for which he won Best Dame in the 2017 Break a Leg Awards.  “L’Histoire is a very special piece for me because it was the very first work I conducted in a public concert,” says Woods. “Stravinsky and I go back a lonnnng way. I told Ben, the only way the piece could really go wrong is if one were to make it too serious and earnest, and at that, his eyes lit up with a mischievous twinkle which, I think means we’re in for a memorably fun evening.”

Copland’s “Appalachian Spring” has long captivated music-lovers worldwide, and his use of the Shaker Hymn “Simple Gifts” has made that one of the world’s most well-known melodies. Copland wrote the score as a ballet for legendary dancer and choreographer, Martha Graham. Originally titled simply “Ballet for Martha,” the work tells the story of the wedding day of a young couple in the town of Appalachian Spring, Pennsylvania. Created in 1944, the ballet tells a simple story. A young farm couple ruminate on their lives before getting married and setting up house in the wilderness. An itinerant preacher delivers a sermon. An older pioneer woman oversees the events with sympathy and wisdom. The newlyweds muse on their future as night falls.

6th May at 3:30, Revolutionary Romanticism in Shirehall, Hereford

On Sunday 6th May, “On Stage in Elgar Country” sees the ESO moving to Hereford’s Shirehall for the last concert in their current season of very popular Shirehall Sunday concerts. The programme features the ESO performing Beethoven’s thrilling Mass in C Major with the outstanding Academia Musica Choir, the highly regarded scholars choir of Hereford Sixth Form College, under the baton of ESO Assistant Conductor, Michael Young. “The partnership between the ESO and Hereford Sixth Form College has been exceptionally fruitful,” says Head of Music and director of Academia Musica, Jon Weller, who also appears as tenor soloist. “There are very few state schools in the UK where students get to sing regularly with a world class orchestra and to work with conductors like Michael Young and Kenneth Woods. The ESO have a real presence in the music department, and this performance of the Beethoven marks the end of a year which has seen conductors and musicians from the orchestra coming to our campus to talk about topics and works on our A-level syllabus and mentoring young instrumentalists through the orchestra’s Orchestral Scholars programme.”

The concert will also include side-by-side performances by with the ESO and  Herefordshire Youth Orchestra of Beethoven’s Leonore Overture no. 3 and Weber’s Overture to Der Freiscütz under the batons of Kenneth Woods and Michael Young. “As the partner orchestra of the music hubs in both Herefordshire and Worcestershire, we’re constantly looking for ways to involve young people in our concerts and outreach,” says Michael Young, whose dual position as Assistant Conductor of the ESO and Conductor of the HYO underlines the closeness of the collaboration between the ESO and the music services in both Herefordshire and Worcestershire. “But the most important goal of this concert is to make it memorable. It’s incredibly powerful music. We want the young musicians and the audience to come away really excited about what has been achieved and what this kind of partnership work can deliver in the future.”

For Kenneth Woods, the concert captures a generation of revolutionary change in music. “Beethoven’s musical language was quite classical, but his temperament and his message as a composer was incredibly radical. His Leonore Overture no. 3 was meant to be part of his opera, Fidelio, but the piece is so dramatic on its own that he decided it overwhelmed the first half of the opera.  It’s a piece about persecution, political power, justice and freedom- and it’s only gotten more and more topical over the last 200 years.”

For conductor Michael Young, the Mass in C is a hidden diamond among Beethoven’s output. “It’s got everything – from the highly personal and reflective in the Kyrie and Sanctus to the thrilling ‘prime-Beethoven’ drama of the Gloria and Credo. He really poured his love into the score.” Weber’s Der Freischütz also points the way to the future as a seminal work of the Romantic era. “Weber and Beethoven were men of the same era, but not quite the same generation, and Weber’s language and subject matter was much more Romantic than Beethoven’s. From this piece comes all of Wagner and much more.”

“On Stage in Elgar Country” is supported by the Bransford Trust and Arts Council England.

For additional information or to arrange an interview, contact Karen Fletcher archerypromos@btinternet.com