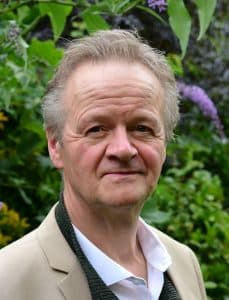 The English Symphony Orchestra continue their acclaimed series of virtual concerts filmed at Wyastone Concert Hall on the 11th of June with a programme of music by the orchestra’s current “John McCabe Composer-in-Association”, Adrian Williams. The programme opens with Williams’ mercurial and virtuosic Chamber Concerto: Portraits of Ned Kelly, based on paintings of the late Sidney Nolan, continues with his touching threnody Russells’ Elegy and concludes with his nature-inspired string orchestra masterpiece, Migrations.Williams, who succeeded David Matthews as Composer-in-Association in 2020, came to the attention of the ESO’s Artistic Director, Kenneth Woods, fairly recently. “Adrian and I met at an ESO concert in Cheltenham a couple of years ago,” says Woods. “Although we’d been acquainted on social media for some time, I realised when we met that I didn’t know his music. After that encounter, I checked out his website, and within 24 hours I was convinced he was one of the finest composers of our time and I immediately asked him to succeed David at the ESO.”

Williams came to early renown after winning the prestigious Menuhin Prize in competition. Lord Menuhin, who also served as Principal Guest Conductor of the ESO during the 1990’s, described the young Williams as “a master of intricate patterns and forms”. Williams showed precocious gifts as a pianist (he is particularly known for his ability to improvise), and his talents as both pianist and composer were nurtured by mentors including Lennox Berkeley and John Russell. In the 1980’s, he founded the Presteigne Festival on the Welsh-English borders where he has lived for most of his adult life. In addition to many commissions from the BBC, he has enjoyed long partnerships with the cellist Raphael Wallfisch (for whom he wrote his Cello Concerto, commissioned by Roger Wright for BBC Radio 3 and the BBC National Orchestra of Wales, in 2009), the celebrated chamber choir I Fagiolini and their director Robert Hollingworth and the Amsterdam Sinfonietta under Candida Thompson. He has also worked closely with the cellists of the Concertgebouw Orchestra.

Williams’ Portrait’s of Ned Kelly, which opens the concert, was one of two works inspired by his friendship with the late painter, Sidney Nolan, whose last home in rural Herefordshire made he and Williams neighbours. “I used to practise on his piano,” said Williams. “He was a complex man and a powerful personality.”

Woods describes the work as “brilliant and exceptionally virtuosic,” noting that “Adrian described the piece to me as a being ‘like a modern-day Till Eulenspiegel’, to which I added ‘on acid.’ It’s witty, it’s surreal, it’s thrilling, it’s fantastical, and, somehow, in the end it’s very moving.” The work was inspired by Nolan’s famous paintings of the Australian outlaw and bushranger, Ned Kelly.

The programme concludes with Migrations for 22 Solo Strings, a work Woods describes as “one of the very greatest works in the rich canon of English string music.”

“Adrian’s connection to nature is a recurring theme throughout his work,” says Woods. “In this piece, his meditation on the migrations of birds evokes both wonder and sorrow, and a profound mixture of connection and isolation. It’s one of the most moving works I’ve come across, from any generation, in a long, long time, and you can see in the performance the depth of the players’ emotional engagement with it as well.”

In between these two large-scale works is Williams’ short string threnody, Russells’ Elegy. “It’s important to note the apostrophe in the title,” quips Williams. “It’s in memory of two friends named ‘Russell’: my former teacher and mentor, the pianist John Russell, and the filmmaker Ken Russell, who I worked with on several projects and admired a great deal.”

Williams’ association with the ESO continues, and in December the orchestra will premiere his First Symphony as part of its acclaimed 21st Century Symphony Project. “Adrian’s First Symphony was a lifetime in the making,” says Woods. “It’s the largest work in the project to date, a nearly hour-long score of searing power and dark beauty. We’re very grateful to the Steven R. Gerber Trust, without whose support such an ambitious project would not be possible.”

Next in the ESO’s Music from Wyastone series is a performance of Mahler’s Ninth Symphony, to be released on the composer’s birthday of 7 July, and the orchestra makes its long-awaited return to live concerts on the 28th of July at the Three Choirs Festival in a programme which pairs Beethoven’s Seventh Symphony with the world premiere of Steve Elcock’s Eighth Symphony and the first performance of the new wind ensemble version of Emily Doolittle’s Woodwings.