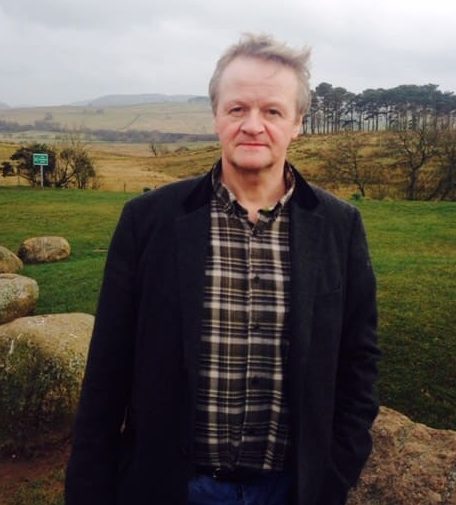 Hailed by former ESO Principal Guest Conductor Yehudi Menuhin as “a master of intricate patterns and forms,” Adrian Williams was born in 1956 and showed precocious talent at the piano from the age of four when he began spontaneously improvising. Lessons began at 5 but he only showed improvement with reading music at around the age of ten, when he began to experiment with composition. His first performed piece was a G minor piano trio and a carol, both written when he was 12 and performed at his school. He developed quickly in both piano and composition through his teens and at 13 began composition consultations in London with Lennox Berkeley. A large scale work for three choirs and ensemble ‘The Bridge’ was performed at the Royal Academy of Music as part of the RAM’s 150th anniversary celebrations in 1972. In 1974 he became a double scholar at the Royal College of Music where he won awards for both piano and composition, in 1976 the director of the RCM Sir David Willcocks  conducting his ‘Symphonic Studies’ with the RCM orchestra. A Leverhulme scholarship enabled him to continue at the RCM until 1978, the year he won the international Menuhin Prize for composers.

At around this time he began working with the arranger Peter Knight, and through this learned much about the pop world including pop scoring for tv shows. These skills equipped him well in future years when scoring for TV and film.

The years that followed saw a period as Composer in Residence at Charterhouse School from 1980  during which his music underwent a stylistic reassessment. The outcome was a tougher harmonic language that although more adventurous in its range and scope, retained an underlying melodic vein that has always remained central to his music. Several important works were to emerge from this period including the String Quartet no 2 (for the Chilingirian Quartet), a remarkable uninterrupted span of thirty eight minutes and the intricately orchestrated symphonic poem Tess for Vernon Handley and the Guildford Philharmonic Orchestra.

During the eighties a move to the Welsh borders saw Williams find his spiritual home, along with the peace of mind and creative impetus for many of his most vital works. Amongst them is the piece spawned by his winning the Guinness Prize for Composition, the cantata after Louis MacNeice Not Yet Born, two works inspired by Sidney Nolan Images of a Mind for cello and piano, inspired by the 1986 self-portrait, and the Chamber Concerto, ‘Portraits of Ned Kelly’ (Brighton Festival commission), the Cantata after Alun Lewis The Ways of Going (Hay Festival commission) and Dies Irae, the latter a BBC commission that in its power of expression remains one of Williams’ most personal statements.

It was during his early years in the Welsh borders that Williams became the founding light of the Presteigne Festival, an enterprising event that continues to thrive and maintains a strong commitment to contemporary music. His final festival as director in 1992 coincided with the UK’s European Arts Festival and participated with a programme entitled ‘Open Borders’ based around the commissioning of works by young composers from all (then) twelve member states of the European Union.

The multi-faceted, even eclectic nature of Adrian Williams’ music has also seen him branch into film and television, whilst his absorption of influences as diverse as English song and elements of jazz and minimalism has seen his catalogue of major works grow to demonstrate a richly compelling creative voice.

Ever searching for new creative horizons, Williams’ recent scores, including Maelienydd (2008) for Chamber Orchestra, the String Quartet no 4, the 2016 Piano Trio (Piano Trio Society and Gloucester Music Society joint commission) and especially the symphony currently in progress, exhibit a deeply-felt emotional core, conjuring with the atmosphere and wild, open spaces of the composer’s Welsh Borderland surroundings with a renewed sense of wonder and mystery.

The Cello Concerto (2009), commissioned by the BBC, marks the culmination of Adrian Williams’ long standing relationship with Raphael Wallfisch, an ardent champion of the composer’s works for cello. Wallfisch recorded Images of a mind for Metronome recordings with the composer, a disc which also includes another work commissioned for him Spring Requiem and the first ever recording of the early prize-winning Sonata for solo ‘cello (1976-7)

Continuing to be important are his fruitful collaborations with the celebrated vocal group I Fagiolini and its director Robert Hollingworth. To date there are nine commissioned works for the ensemble including the latest Shaping The Invisible using a newly-commissioned poem by Welsh national poet Gillian Clarke and issued on the Coro label.

Also significant are his connections with Holland and Poland. Over several decades he has fulfilled many works and arrangements for the Amsterdam Sinfonietta and its charismatic leader Candida Thompson, including Migrations for 22 solo strings dating from 1998 and a new Concerto for Strings in one movement, jointly commissioned with the Presteigne Festival. Among his arrangements for the Amsterdam Sinfonietta are versions for string orchestra and baritone of Beethoven’s An die ferne Geliebt and Butterworth’s A Shropshire Lad made for the great American baritone Thomas Hampson.

The most substantial work from Holland has been the large-scale cantata for chorus, children’s choir, soloists and chamber orchestra The Idea Of Peace. Commissioned by the Toonkunstkoor Utrecht for the 300th anniversary of the Treaty of Utrecht, with a libretto compiled by Arjen Eigjenraam, it was premiered in St Paul’s Cathedral, London as part of the 2013 City Of London Festival, and subsequently in Vredenburg, Utrecht the same year.

Two commissions emanated from important collaborations in Poland in 2017 & 2018, a large-scale chamber work for eight players The Diminishing Minutes of Peace, based on an essay by Joseph Conrad. for the Art Deco Group in Warsaw, and Spectrum, a concerto for bassoon and string orchestra with percussion and harp, premiered in June 2018 in Poznan by Arek Adamczyk as part of a celebration of the composer’s music, which included all his music for bassoon, dating back to 1979.

For the past three years Adrian has lived and worked on the borders of Wales close to Hergest Ridge which he considers a perfect creative environment.