Five Stars for An Eventful Morning in London from The Times 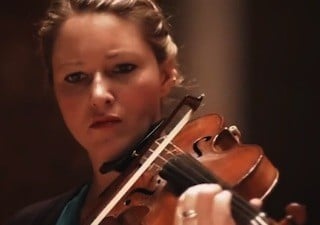 The violinist’s playing is rivetingly incisive throughout this recording of five 21st-century concertos
Richard Morrison
June 9 2017, 12:01am, The Times

Harriet Mackenzie shows her zest for adventure in this ambitious album

★★★★★
The recording’s title is a tease. An Eventful Morning in East London is the name (almost) of Rob Fokkens’s violin concerto, one of five 21st-century concertos played by the indefatigably adventurous violinist Harriet Mackenzie on this superb release. However, although Mackenzie is a Londoner, Fokkens is South African. So his East London,in the Eastern Cape, is 6,000 miles south of Shoreditch.

His concerto reflects it too. Fokkens has Charles Ives’s ability to enrich his own imaginatively orchestrated style with “found” music — in this case an outdoor African soundscape that seems to incorporate a passing funeral procession replete with snatches of Dies Irae as well as a jazz band.

That makes for a fascinating 13 minutes. Yet it’s just one highlight on an album mixing the work of two older composers — Paul Patterson and David Matthews (composer) — working in a generally tonal idiom with the quirky new generation, represented by Fokkens, Emily Doolittle and Deborah Pritchard.

What unites them is an ability to create something fresh out of existing material. Pritchard’s Wall of Water, for instance, is a response to a series of Maggi Hambling paintings. I’m glad they aren’t reproduced in the accompanying brochure, because Pritchard’s music — growing out of a tiny, semitonal twist cloaked in otherworldly harmonics — paints its own pictures in the imagination. It is profusely atmospheric and virtuosically challenging, and it rises to an intense cadenza (a bit too arpeggio-dependent, perhaps) before imploding to where it started.

Doolittle’s falling still has a similar atmospheric quality. The violin, representing a bird in flight, hovers over slow, lush string-clusters representing more inanimate sounds of nature. That suggests a latter-day Lark Ascending, but Doolittle’s style is far more astringent than Vaughan Williams and has a more elegiac hue.

So does Matthews’s Romanza, which, despite its name, is a curiously unsettling piece in which the soloist moves from moodily impressionistic rhapsody to enigmatic Viennese waltz, where the balance between pastiche and irony is never quite fixed. To me it spoke of youthful joys recollected into ruefulness, if not despair.

By contrast, Patterson’s Allusions for two solo violins and strings (Philippa Mo is the other excellent protagonist) is pure pleasure, three movements each riffing on a different operatic character. The first, brilliantly energetic and manically contrapuntal, alludes to Falstaff and his tangled love life. The second, called Mindscape, refers to Don Giovanni’s encounter with the Commendatore, with the music rising from dark rumination to nightmarish crisis. And the third is a glorious postmodern riff on Mozart’s Marriage of Figaro overture, full of dizzy syncopations.