The Trumpet Shall Sound from Great Malvern Priory 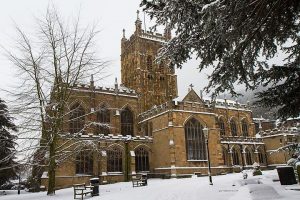 As a sort of musical rite of passage for the Christmas season, Handel’s Messiah is still to this day a firm fixture in the festive calendar and this year is no exception as the English Symphony Orchestra join forces with the Academia Musica Choir to perform this stunning oratorio in the setting of the Great Malvern Priory.

Due to changing audience tastes and attitudes towards Italian opera in London during the 1730s and 40s, Handel turned to the oratorio as a cheaper and more accessible alternative to opera. As a genre the oratorio had a lot in common with opera but as it was not staged and the librettos were now performed in English, often using passages from the Old Testament, Handel opened up a new musical discourse which resonated with audiences in a direct but more familiar way.

Throughout his life Handel was a generous man who donated regularly to those less fortunate, and he donated some of the proceeds to local causes from the debut performance of the Messiah, which took place in Dublin in the Spring of 1742.

It might have only taken Handel just three weeks to compose but the lasting legacy and power of hearing his Messiah in person, almost 280 years after its first performance, is testament to his masterful setting of these sacred texts, leaving the listener uplifted and ready for Christmas – side note, the piece was originally intended as an Easter offering but we won’t tell if you won’t… Merry Christmas!