Long hailed as the International Orchestra of Elgar Country, the English Symphony Orchestra, based in Elgar’s home city of Worcester, will present a performance of David Matthews’ acclaimed orchestration of the Elgar String Quartet as part of their Music from Wyastone series of virtual concerts on the ESO Digital platform on 14 May.

The music of Sir Edward Elgar has been central to the ESO’s repertoire since its founding as the English String Orchestra by William Boughton in 1980. Boughton and the orchestra recorded much of the Elgar orchestral canon together during his 25-year tenure with the orchestra. The orchestra’s connection with Elgar was further deepened by their long collaboration with Elgar’s protégé, Sir Yehudi Menuhin, who served as the ESO’s Principal Guest Conductor from 1990 until his death, and later by Principal Conductor Vernon Handley, who made his ESO debut in the orchestra’s 2005 Elgar Festival. In addition to presenting many celebrations of Elgar’s music at festivals run by the orchestra, in 2017, the ESO was named Orchestra-in-Residence of The Elgar Festival, established by decree of the City of Worcester as the official celebration of the life and music of Elgar. Each year, the ESO headlines an ambitious series of concerts in Worcester, Malvern and across Elgar Country, working closely with the Elgar Society and The First, Elgar’s Birthplace. At 2019 Festival, the ESO gave the official 100th Anniversary Performance of the Elgar Cello Concerto with Raphael Wallfisch in Worcester Cathedral.

Under the leadership of current Artistic Director, the ESO has continued its championing of Elgar, including performances of the Violin Concerto with Nicola Benedetti and Alexander Sitkovetsky and the Cello Concerto with Sheku Kanneh-Mason.

The orchestra also plays an ongoing role in expanding the Elgar canon through arrangements and transcriptions. In 2015, the ESO premiered Donald Fraser’s orchestration of the Elgar Piano Quintet, a performance hailed as “Premiere of the Year” in Classical Music Magazine, and described by long-time senior critic of the Birmingham Post, Chris Morley, as one of the two most exciting concerts I have been to in nearly five decades reviewing concerts.” Woods and the ESO also premiered Fraser’s choral version of Sea Pictures in Hereford Cathedral in 2015, and more recently have recorded a number of Fraser’s orchestrations of Elgar miniatures for cello and strings with Raphael Wallfisch.

David Matthews’ string orchestra adaptation of the Elgar String Quartet was made at the instigation of George Vass, and premiered at the 2010 Presteigne Festival. Woods worked closely with Matthews on the work ahead of a performance at the 2017 Colorado MahlerFest, and the ESO first performed it at the 2018 Elgar Festival. “David’s arrangement is an important and very useful addition to the Elgar repertoire for string orchestras,” says Woods. “Elgar’s Introduction and Allegro and Serenade for Strings are among the most sublime works ever written for strings, but both risk being heard too often. The Quartet is a bigger work, a more difficult work, and a more substantial work, and forms a major new challenge for string orchestras everywhere. It was so exciting to come to this piece and to continue to develop our shared interpretation of it.” 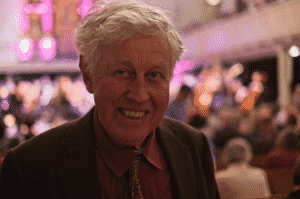 One of the most important of British composers, David Matthews served as Composer-in-Association for the ESO from 2018-19. His Ninth Symphony was written for the ESO’s 21st Century Project. “I always thought the Elgar Quartet was almost orchestral even as a string quartet,” says David Matthews. “Of course, it’s a masterpiece and works beautifully in its original form, but I thought the larger forces and the addition of a bass part could give it a new dimension.”

The performance premieres on the 14th of May at 7:30, and is available to the public for four days. ESO Digital offers unlimited access to ESO archival performances, exclusive content and events for supporters who donate a minimum of £5/month – find out more at www.eso.co.uk/digital/