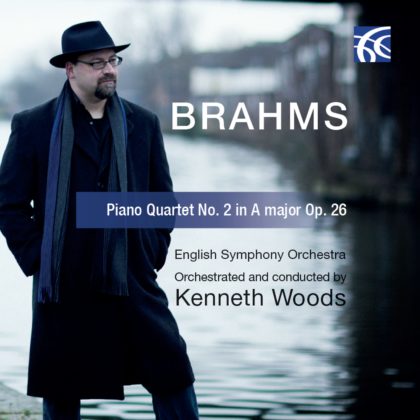 From the Summer 2019 issue of Musical Opinion Quarterly, a new five-star review from Guy Rickards:

There are a number of orchestrations of Brahms piano or chamber works, most notably (perhaps) Rubbra’s of the Handel Variations, Op 24, made in 1938, and Schoenberg’s of the Piano Quartet No 1 in G minor, Op 25, from the previous year. Now the trinity of 1861 masterpieces is completed by conductor, cellist and occasional composer Kenneth Woods’ arrangement of the Piano Quartet No 2 in A, Op 26. I have never been entirely convinced by Schoenberg’s reworking (the use of a xylophone not least), preferring the original at all points. Rubbra’s arrangement has been criticised for being too heavily scored—something that has been levelled at his contemporaneous First Symphony—but I have found it a more involving listen than Schoenberg’s.

Let me put my head above the parapet straightaway and say that Woods’ orchestration of the Second Piano Quartet is by a distance the finest of the three, and the most Brahmsian as well. Right from the opening, magically set for high horns (Woods writes about this in his entertaining booklet note), one is drawn in to a truly Brahmsian orchestral landscape and what unfolds over the ensuing forty-nine minutes is nothing short of a revelation. So natural does it sound that, heard with the innocent ear, I wonder how many could identify whether this work is a piano quartet orchestrated a century-and-a-half later, or a symphony reduced to piano and string trio? It is also extraordinary, given the fluency of the arrangement that it took so long to complete, begun in Ischia (though unhaunted by the shades of Walton or Henze) in 2008 but not finished until seven years later.

As with all the finest recastings, Woods transcription for orchestra makes one appreciate details one does hear in the music’s original guise. Most telling of these for me was the Grieg-like nature of the concluding Allegro, as if it had strayed from the Norwegian’s Symphonic Dances. The English Symphony Orchestra is one of Woods’ principal bands and their ongoing relationship has yielded some tremendous results, for instance the recording of Philip Sawyers’ Third Symphony last year (also played in St John’s, Smith Square). In this new performance, the Orchestra play with unmitigated delight. It is not a matter of duty, pandering to their chief conductor’s latest whim, but a real performance of total conviction. I love it.